Apple’s new iCloud services was announced at the World Wide Developer Conference in San Francisco. iCloud services will put everything from mobile apps to digital pictures to music in the “cloud,” where users can easily store and access them. Apple CEO Steve Jobs unveiled the iCloud service, which acts as a digital hub that will store and replicate content so that it can be shared among multiple iOS devices, such as iPhones, iPod Touches, and iPads.

Cloud will enable users to propagate app and iBooks purchases across devices. For example, purchase an iBook on your iPad, tap the new iCloud button, and the same book will be downloaded on your iPhone. iCloud also features deep backup sets and automatically performs daily backups over Wi-Fi. Backups include music, books, apps, camera roll, device settings and app data. 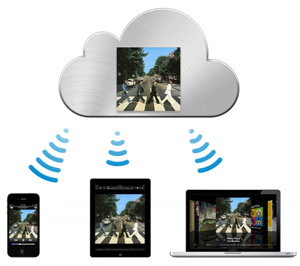 “Now the (digital) hub is in the cloud,” Jobs said during the keynote presentation, “If you get something on your iPhone, like a picture, it goes up to the cloud, and gets pushed down to the other devices automatically.”

What this means for consumers is that they’ll no longer have to connect their iOS devices to a computer to back up information or sync their music. They also won’t have to connect their devices to a computer for software updates. Their iTunes music collection, photos taken on their iOS devices, videos viewed on those devices, iBooks, e-mail, calendar information, and more will all be stored in the Apple iCloud so that users can access them on any iOS device. Unlike other cloud-based services that may require users to manually upload music, Jobs said that Apple has automated the process to make it easy.

It all sounds great for people with iOS devices, who want access to all their content on any device. But how will all this content travel between the iPhone or iPad and the iCloud? Will this put a big strain on carrier networks, and cost consumers more money on their data plans? Daily updates could indeed put a strain on already struggling cellular networks. But Apple seems prepared to mitigate this problem by forcing some of the data-intensive activities to be done over Wi-Fi instead of over a carrier’s cellular network.
Something exciting to look forward to, as the new iCloud services will be available in Fall 2011